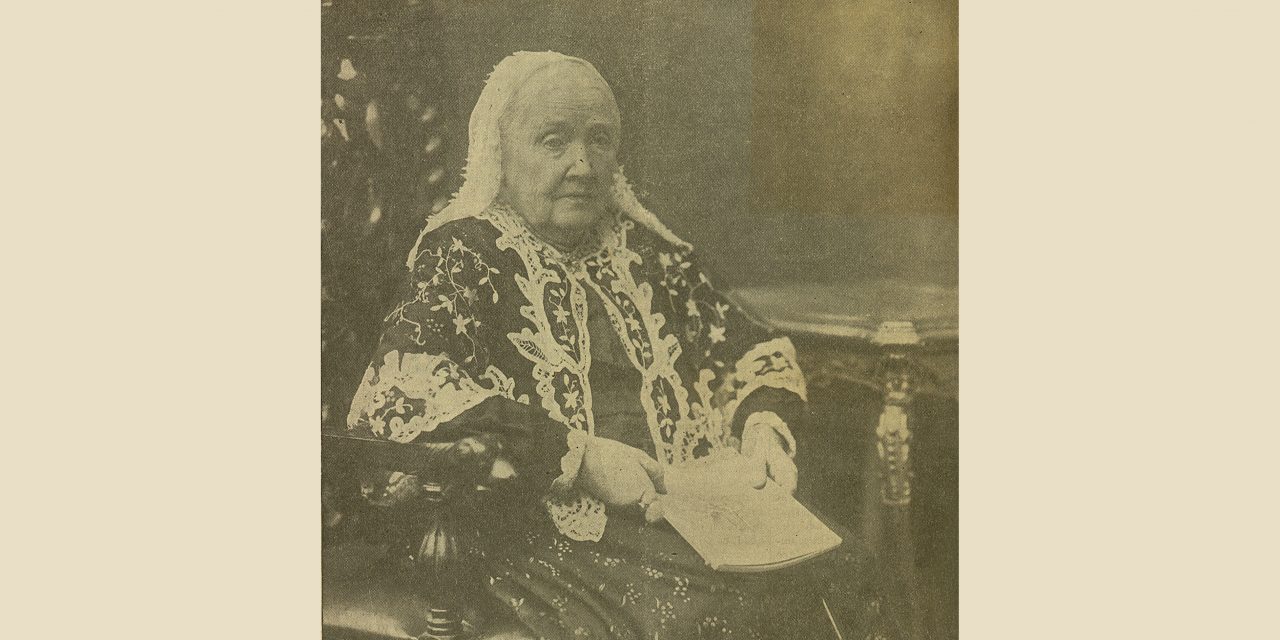 Julia Ward Howe was, by 1893, a “grey eminence” in both popular culture and the women’s rights movement.  An anti-slavery activist before the Civil War, an organizer of support for the Union during the war, author of the lyrics to Battle Hymn of the Republic, she came to focus on advocating for women’s rights and peace later in life.  She was among many women and men invited to address The World’s Parliament of Religions at the 1893 Columbian Exposition in Chicago.

The speech is reproduced here as printed in The World’s Parliament of Religions, Volume II, edited by the Rev. John Henry Barrows, D.D., Chicago, 1893.

I only hope you may be able not only to listen, but also to hear me. Your charity must multiply my small voice and do some such miracle as was done when the loaves and fishes fed the multitude in the ancient tune which has just been spoken of. I have been listening to what our much honored friend (Prof. Wilkinson) has said, and yet, before I say anything on my own account, I want to take the word Christianity back to Christ himself, back to that mighty heart whose pulse seems to throb through the world to-day, that endless fountain of charity out of which I believe has’ come all true progress and all civilization that deserves the name. As a woman I do not wish to dwell upon any trait of exclusiveness in the letter which belongs to a time when such exclusiveness perhaps could not be helped, and which may have been put in where it was not expressed. I go back to that great Spirit which contemplated a sacrifice for the whole of humanity. That sacrifice is not one of exclusion, but of an infinite and endless and joyous inclusion. And I thank God for it.

I have turned my back to-day upon the great show in Jackson Park in order to see a greater spectacle here. The daring voyage of Columbus across an unknown sea we all remember with deep gratitude. All that we have done and all that we are now doing are not too much to do honor to the loyalty and courage of that one inspired man. But the voyage of so many valorous souls into the unknown infinite of thought, into the deep questions of the soul between men and God — Oh, what a voyage is that! O, what a sea to sail ! And I thought, coming to this Parliament of Religions, we shall have found a port at last; after many wanderings we shall have come to the one great harbor where all the fleets can ride, where all the banners can be displayed.

It has been extremely edifying to hear of the good theories of duty and morality and piety which the various religions advocate. I will put them all on one basis, Christian and Jewish and ethnic, which they all promulgate to mankind. But what I think we want now to do is to inquire why the practice of all nations, our own as well as any other, is so much at variance with these noble precepts? These great founders of religion have made the true sacrifice. They have taken a noble human life, full of every human longing and passion and power and aspiration, and they have taken it all to try and find out something about this question of what God meant man to be and does mean him to be. But while they have made this great sacrifice, how is it with the multitude of us? Are we making any sacrifice at all? We think it was very well that those heroic spirits should study, should agonize and bled for us. But what do we do?

Now, it seems to me very important that from this Parliament should go forth a fundamental agreement as to what is religion and as to what is not religion. I need not stand here to repeat any definition of what religion is. I think you will all say that it is aspiration, the pursuit of the divine in the human; the sacrifice of everything to duty for the sake of God and of humanity and of our own individual dignity. What is it that passes for religion? In some countries magic passes for religion, and that is one thing I wish, in view particularly of the ethnic faiths, could be made very prominent — that religion is not magic. I am very sure that in many countries it is supposed to be so. You do something that will bring you good luck. It is for the interests of the priesthood to cherish that idea. Of course the idea of advantage in this life and in another life is very strong, and rightly very strong in all human breasts. Therefore, it is for the advantage of the priesthoods to make it to be supposed that they have in their possession certain tricks, certain charms, which will give you either some particular prosperity in this world or possibly the privilege of immortal happiness. Now, this is not religion. This is most mischievous irreligion, and I think this Parliament should say, once for all, that the name of God and the names of his saints are not things to conjure with.

From this Parliament let some valorous, new, strong, and courageous influence go forth, and let us have here an agreement of all faiths for one good end, for one good thing — really for the glory of God, really for the sake of humanity from all that is low and animal and unworthy and undivine.

The above is an address from Julia Ward Howe delivered at the 1893 Parliament of Religions.