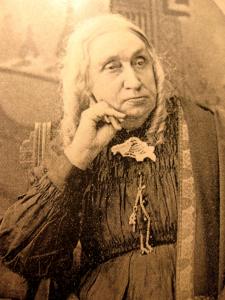 Lucy Newhall Danforth was born in Sturbridge, Massachusetts, in 1817. In her autobiography, she reported that from an early age, about six, she was horrified to learn of the existence of slavery, and bothered her mother with many questions about it. In 1824, Lucy’s mother died, and her mother’s sister Lois took over mothering tasks. Lois married Lucy’s father in 1833.

Lucy also reports in her later writing that she was bothered with the religious revivalism of her early childhood, and asked her stepmother many questions about religion and the Bible, with her stepmother urging her to limit her reading to the Psalms and New Testament.

Never formally educated, Lucy began working as a schoolteacher, and her religious questioning led her during this period to become a Universalist.

She married a fellow Universalist, John Maubry Davis, in 1835, and they moved to Boston. He died of consumption in 1841; they had no children. Lucy returned to teaching to support herself.

Second Marriage, and the Reality of Women’s Rights

In 1843, Lucy married Luther Coleman (she later changed the spelling of her married name to Colman). They moved to Rochester, New York. About 1845, their daughter Gertrude was born. Motherhood, Colman later wrote, brought her attention to women’s rights – how married women and mothers had so few rights and depending on the good will of their husbands for what freedoms they had – and also to slavery, again.

In the early 1850s, the family turned from Universalism to Spiritualism, leaving Christianity completely behind. Colman also began her involvement with the anti-slavery movement, and began making some speeches on the topic with the urging of her friend, Amy Post.

Lucy Colman is listed among those who attended the 1850 Woman’s Rights Convention, the first national meeting on women’s rights.

Andrew Jackson Davis, a leader in the Spiritualist movement, was staying with the family when Luther Coleman was killed in 1854 in a work accident at the New York Central railroad. Lucy Colman credited the accident to the “penuriousness” of the company. Andrew Jackson Davis performed the ceremony, Colman noting later than they had turned down both Unitarian and Universalist churches for the funeral service, which was held at Corinthian Hall.

Left to support herself and her daughter, Colman took a job at a school for African Americans in Rochester. She did not support the idea of a segregated educational system, and persuaded parents to take their children out of the school. In 1856, Rochester provided education for both white and black children.

In her work at the school, Colman met Susan B. Anthony, another teacher. Both spoke out against the unequal pay of male and female teachers. Anthony arranged for Colman to speak at the state teachers’ convention, and Colman gave a controversial speech against corporal punishment in schools, suggesting that if the Bible supported corporal punishment (“spare the rod”), common sense should overrule the Bible.

From 1856 to 1860, Lucy Colman worked first with the Western Anti-Slavery Society and then with the American Anti-Slavery Society, organizing for abolitionism. She worked in New York, but she also traveled to “western” states including Ohio, Iowa and Michigan to lecture against slavery. She often included pleas for women’s rights, as well. Her writings occasionally appeared in the anti-slavery newspaper, The Liberator.

Her work against slavery convinced her further of the church’s complicity with slavery. She found at many of her appearances that local ministers led the opposition, and sometimes actual attack, against her. She was known for handling her hecklers well. When one minister quoted the Bible’s prohibitions of women teaching, she quoted back at him the Bible’s prohibition against men being clean-shaven.

In 1858, during a time she was in Rochester, she joined in a major protest against capital punishment led by Frederick Douglass and Susan B. Anthony. In 1859, she helped in a petition drive for the right to vote for women in New York State.

Colman remained active in the women’s rights movement as well. She served on the Finance Committee of the 1860 Woman’s Rights Convention.

In 1862, her daughter Gertrude was attending the New England Medical College when she died. Lucy Colman arranged, rather than a religious (Universalist or Spiritualist) service, to have Frederick Douglass officiate.

In 1863, Colman was one of the secretaries in a national “convention of loyal women,” with Lucy Stone presiding, and others including Elizabeth Cady Stanton, Susan B. Anthony, Ernestine Rose, Antoinette Blackwell, Amy Post and Angelina Grimke Weld. Their purpose was to call women to “do everything in their power to aid the Government in the prosecution of this war to the glorious end of freedom” – and resolutions supported the Emancipation Proclamation and legal freedom for former slaves with no laws that would “debar them from any rights or privileges as free and equal citizens of a common Republic.” Another resolution read:

“There can never be a true peace in this Republic until the civil and political rights of all citizens of African descent and all women are practically established.”

In 1864, Colman took on a position as matron with the National Orphan Asylum in Washington, DC, run by the National Association for the Relief of Destitute Colored Women and Children. She left that September; from her autobiography it seems she was in a conflict attempting to get a teacher fired, a teacher who was a relative of the famous educator Horace Mann.

In 1864 and 1865, she taught and served as a superintendent in schools in Washington and Arlington, Virginia, for the National Freedman’s Relief Association, an institution founded to help former slaves during Reconstruction.

On October 29, 1864, Lucy Colman accompanied Sojourner Truth to the White House to meet President Abraham Lincoln; she is the “Mrs. C” Truth referred to in a letter about the visit. Colman had arranged the meeting via Elizabeth Keckley, dressmaker to and confidante of Mary Todd Lincoln. While Sojourner Truth had positive words for the encounter (“I felt that I was in the presence of a friend”), Colman was not impressed by the president’s reception of the former slave. She reported, soon after the event, that Truth had said that he was the only president who had helped her people. Lincoln, Colman reported, replied:

“And the only one who ever had such opportunity. Had our friends in the South behaved themselves, I could have done nothing.”

As she said in her Reminiscences (1891), written long after the events:

“Mr. Lincoln was not himself with this colored woman. He had no funny story for her, he called her aunty, as he would his washer-woman, and when she complimented him as the first Antislavery President, he said, ‘I’m not an Abolitionist; I wouldn’t free the slaves if I could save the Union in any other way – I’m obliged to do it.’”

(“Aunty” was not universally a term of disrespect; it was used in many other letters Sojourner Truth included in her autobiography and was sometimes used to address older white women in the women’s rights movement in letters to them. It was fairly well known, even in the 19th century, that Lincoln did not originally favor abolishing slavery, but limiting its boundaries. Truth later reported that he’d written “For Auntie Sojourner Truth” in her autograph book that day.)

Another black woman accompanied them to the interview, asking for help since her husband, fighting in the Union Army, had not been paid. Lincoln first told Colman that he could do nothing, but she convinced him to recommend in writing that something be done.

After Lincoln’s death, Lucy Colman and Sojourner Truth met with President Andrew Johnson; Colman was more positive about that meeting.

Lucy Colman, about 1870, moved in with her sister, Aurelia Raymond, a physician, in Syracuse, New York. She lived there until her death.

She was quite active in freethought circles, writing columns for The Truth Seeker, a freethought journal and speaking often at freethought conventions.

In 1878, at one such convention, police arrested several of the key activists – D.M. Bennett, Josephine Tilton and W.S. Bell – for selling a publication about free love. Colman and Amy Post paid Tilton’s bail. She attended the 1878 trial of Ezra Haywood who was charged with violating the Comstock Act.

That same year, at a convention of the National Woman’s Suffrage Association, Colman proposed a resolution denouncing religion as the major source of women’s inferior position. Frederick Douglass argued against the resolution, but Colman responded with his own arguments about equality. The resolution passed.

After the trial of anarchists accused of responsibility for a bomb in the strike that came to be known as the Haymarket Riot, she wrote for a freethought publication in defense of Lucy Parsons whose husband had been executed.

In 1889, Lucy Colman’s friend and mentor Amy Post died. Lucy Colman spoke at her funeral, held at the Unitarian Society.

She published her autobiography Reminiscences in 1891, after working on it for some years.

In writing of Colman for 400 Years of Freethought in 1898, Samuel Porter Putnam describes her among the “New World roll of honor”: “Lucy N. Colman, in whom the ardor of youth finds no ashes in snowy age, and the silver morn is radiant ever,” listing her after Sally Bush (Abraham Lincoln’s stepmother), Abby Kelley and Amy Post, and before the Grimke sisters (Sarah Grimké and Angelina Grimké), Matilda Joslyn Gage and Helen H. Gardener. In a brief biography of Colman for the book, Putnam described her:

“Mrs. Colman is radical in every direction. She is opposed to white slavery as well as black slavery, and has devoted herself to woman’s rights as well as to the rights of man. She is a radical Freethinker, having outgrown superstitions of every kind. She has not lost her interest in any living question. She has had a busy and eventful career; has mingled with the world, among its characters and great movements, and has done her share to bring about the great gains of the present time. She has shown what a woman can do who has self-reliance, energy, and devotion to truth and right. Her name shines in the annals of progress.”

Religion: Adopted Universalism in her younger years, moved to Spiritualism, then to freethought. 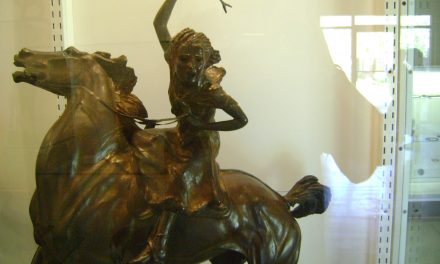